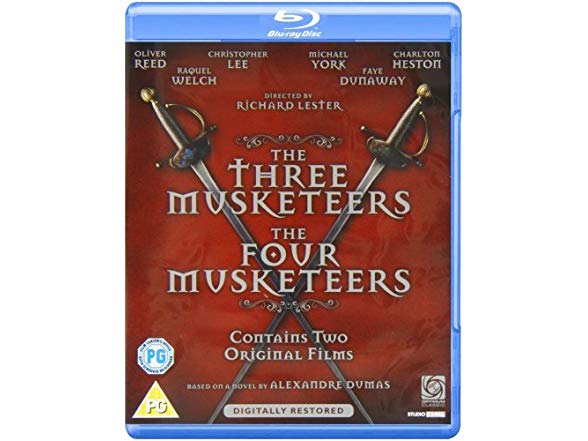 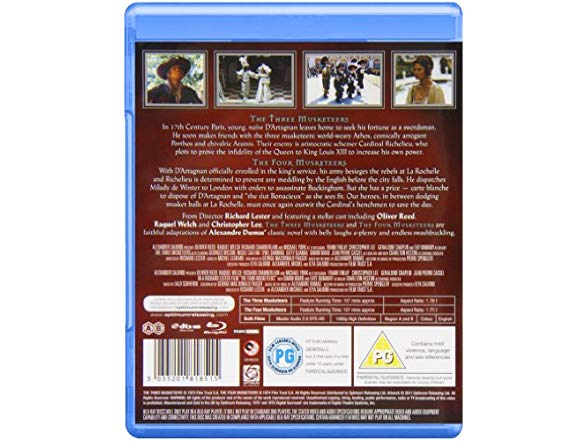 The Three Musketeers (1973)
The young D'Artagnan arrives in Paris with dreams of becoming a king's musketeer. He meets and quarrels with three men, Athos, Porthos, and Aramis, each of whom challenges him to a duel. D'Artagnan finds out they are musketeers and is invited to join them in their efforts to oppose Cardinal Richelieu, who wishes to increase his already considerable power over the king. D'Artagnan must also juggle affairs with the charming Constance Bonancieux and the passionate Lady De Winter, a secret agent for the cardinal.

The Four Musketeers (1974)
D'Artagnan (York), Athos (Reed), Aramis (Chamberlain), and Porthos (Finlay) scuttle the plans of Lady de Winter (Dunaway) to remove Queen Anne (Chaplin) from the seat of power. De Winter is determined to get revenge against the Musketeers, and when she learns that D'Artagnan is infatuated with the lovely Constance (Welch), she first tries to foil their romance by seducing D'Artagnan herself, and then by persuading Rochefort (Lee) to kidnap Constance. She then engineers the assassination of the Duke of Buckingham (Ward), a close friend of D'Artagnan; when word of the Duke's death and Constance's imprisonment reaches D'Artagnan and his comrades, the foursome ride off to rescue the fair lady and see that justice is done against de Winter. SCREENED/AWARDED AT: BAFTA Awards, Oscar Academy Awards, ...The Three Musketeers / The Four Musketeers - 2-Disc Set ( The 3 Musketeers / The 4 Musketeers ) ( The Revenge of Milady )

In the Box: The Three Musketeers and The Four Musketeers, 2 Disc Set, The Revenge of Milady, Blu-Ray,Region Free

In the Box: The Three Musketeers and The Four Musketeers, 2 Disc Set, The Revenge of Milady, Blu-Ray,Region Free